The transformation of Newquay from a small fishing hamlet to a major Cornish town took place as a result of the purchase of the Manor of Town Blystra by London entrepreneur Richard Lomax in 1832. His initial replacement of the small quay at Newquay by a larger harbour, and completed following his death by industrialist Joseph Thomas Treffry, saw the 1830’s and 1840’s as pivotal decades and what all Newquay’s future expansion would rest upon. The harbour coastal maritime trade would develop as a result of the mineral tramway. In due course replacement of the tramway by a passenger railway from 1876 allow the development and growth of Newquay as Cornwall’s most popular tourist destination.

Here is the brief story of the harbour tramway accompanied by images of the harbour for over nearly 160 years. Images from the collections of Newquay Heritage Archive & Museum and the ‘John Vaughan Collection’ of Newquay images, acquired by Association for Cornish Heritage in order that projects such as this could be carried out. This video support the 2021 Local History and Community Month as a collaboration between Newquay Heritage Archive & Museum and Newquay Library. 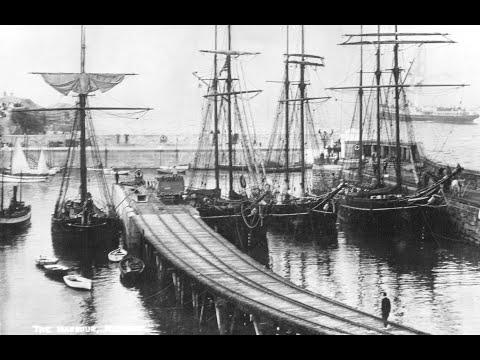 Newquay Harbour and the Newquay Mineral Tramway that transformed Newquay

Many people know about the railway that ran through Newquay during the second half of the 19th century and down to Newquay harbour, but many do not. Question are continually asked about the stone jetty in the middle of the harbour.

Cornish industrialist J T Treffy bought Newquay Harbour as part of the Manor of Towan Blystra in 1838 and completed the work started by Richard Lomax. In order to utilise the harbour for export of his mined minerals he built a tramway from south Cornwall to Newquay and then down to the harbour.

As built this was primarily a mineral tramway and would be traversed by horse drawn wagons. Two major obstacles at the Newquay end of the tramway were for the rail lines to pass over the Trenance Valley and then down a steep incline to the harbour.

The original 1838 Act of Parliament obtained by J T Treffry relating to the harbour at Newquay was amended in 1844, with a second act that included the addition of Tram Roads. This included plans to run the tramway from Newquay Harbour through the town, then via the parishes of St Columb Minor and St Columb Major to St Dennis in the Parish of St Stephens the heart of China Clay Country. Treffry was given authority to buy whatever land was required, benefits of the act also allowed Treffry and his heirs the authority to buy and build whatever was required.

The incline tunnel to the harbour was started in early 1844, the work carried out by Cornish miners well suited for this work. The gradient was 1 foot in 4.5 feet and the tunnel was 80 yards long. Built to allow passage of wagons on a standard gauge railway line these wagons would be raised and lowered via a whim from above. The whim was originally horse powered using ropes, this would soon be replaced by a steam engine and steel cables. Railway lines would carry the horse drawn wagons along the quay to allow loading and unloading of vessels moored there.

The initial phase was completed in January 1849 with the completion of the first Trenance Viaduct and the opening taking place by J T Treffry, the first man across it. Full operation of the whole tramway and operation would not take place until 1857 when there was a grand opening held at what is now the Red Lion in Newquay. Sadly, J T Treffry would not see this as he died in January 1850 with many of his plans and ideas incomplete. By the early 1850’s trade had increased substantially with over 300 movements of vessels through Newquay Harbour. In order to increase the number of vessels able to use the harbour, a central jetty was constructed in 1872. This consisted of a central stone structure reached via a wooden trestle with railway lines on either side of the trestle and stone pier allowing vessels to berth on both sides increasing the harbours capacity three-fold.

Newquay’s days as a maritime coastal trading port weren’t to last. Closure of the East Wheal Rose iron ore mine in 1885 followed by substantial damage to the north quay in 1889 including short sightedness of ship owners, relating to harbour reconstruction, led to a fall in harbour trade. Increased use of larger steamships unable to access the harbour and changes in shipping products saw a large decrease in shipping. World War One saw a further decline in harbour use by vessels and the last Imports and exports were made during the period 1921-1922. The days of Newquay Harbour as a costal maritime port were over, the owners the Great Western Railway turned the harbour area over to the local authority in 1926 and the railway lines were raised in 1928.

The central jetty with its wooden trestle remained in place until gradual deterioration of the decking saw the whole timber structure removed from late 1949. The substantial central pier remains as a reminder to Newquay’s coastal maritime trading past. The tunnel would be used as an aquarium, store for the Newquay Rowing Club gigs and during the 2020’s an outlet for water sports.

The journey for Newquay Harbour from a small pier and a wholly fishing based industry in the early 1800’s to a far more substantial harbour and once again reverting to fishing, with additional water-based businesses has taken two hundred years. The story that can be told of all that has happed during that period will be shared in due course.